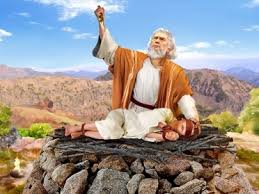 The name Isaac, which means “he laughs,” was derived from his parents’ reaction when God told Abraham that he, at 100 years old, and his wife Sarah, at the age of 90, would have a son (Genesis 17:17;)Isaac was Abraham’s second son; his first, Ishmael, was by Sarah’s maidservant, Hagar, as a result of Sarah’s impatience to give Abraham a family .As soon as Isaac was weaned, Sarah insisted that Abraham send Hagar and her son away, ensuring the family inheritance would go to Isaac .

Many years later, Isaac was taken by his father up a mountain where Abraham, in obedience to God, prepared to sacrifice him .Abraham, Isaac, and two of Abraham’s servants loaded up donkeys and made a three-day journey to Mount Moriah. Leaving his servants behind, Abraham and Isaac carried up the wood, knife, and materials for the fire, saying they would worship and then return. Curious, Isaac asked about the location of the lamb for the offering. Abraham told Isaac that God Himself would provide the lamb. Abraham proceeded to build the altar and tie up Isaac to lay atop it. The Bible gives no indication that Isaac resisted. As Abraham prepared to kill Isaac, an angel stopped him. Abraham then saw a ram in a thicket and offered it instead. There is an interesting analogy in this account that mirrors God giving up His only Son, Jesus, to be sacrificed. God did indeed provide the Lamb—literally for Abraham and Isaac then and figuratively for all of humanity willing to accept the sacrifice of Jesus .

Sarah died when Isaac was in his late thirties. After her death, Abraham sent one of his servants to find a wife for Isaac from their clan, as Abraham was determined his son should not have a Canaanite for a wife .Abraham’s servant prayed to have success in finding a suitable wife, and God directed his quest. When he was forty, Isaac married his cousin Rebekah .The Bible tells us that “he loved her; and Isaac was comforted after his mother’s death” .

At age sixty, Isaac became the father of twins—Jacob and Esau. While Isaac favored his elder son, Esau, Rebekah’s favorite was Jacob. This caused great rivalry within the family and led to Jacob, the younger son, receiving the inheritance and his father’s blessing that should have gone to Esau, the older son, after Isaac and Esau were deceived by Rebekah and Jacob. Isaac became aware of the deceit but could not revoke his blessing on Jacob.Rebekah learned of Esau’s plan to kill Jacob after Isaac’s death and convinced Isaac to send Jacob to her brother Laban to find a wife among her relatives. Isaac again blessed Jacob before sending him on his way, praying that God would give Jacob the blessing given to Abraham.

Abraham died when Isaac was about seventy-five and left everything to him .Though Ishmael had been sent away when Isaac was weaned, both Isaac and Ishmael buried Abraham . The Bible does not talk specifically about their relationship, and the descendants of Ishmael and those of Isaac have historically been enemies; animosity remains to this day. But it is interesting to note that the two men apparently united in mourning their father.

When there was a famine in the land, God appeared to Isaac and told him not to go to Egypt but to remain in the land. God promised to be with Isaac and bless him and give the land to Isaac’s descendants. God reaffirmed the covenant He had made with Abraham, saying that He would make his descendants as numerous as the stars and bless all the nations of the earth through them.

Isaac remained in the land of Canaan. But, similar to what his father had done years before his birth, in fear, Isaac presented Rebekah as his sister rather than his wife .But, just as God had protected Sarah, He also protected Rebekah. God blessed Isaac with bountiful crops and wealth, so much so that the Philistines became jealous and stopped up the water wells Abraham had dug. The Philistine king asked Isaac to move, and Isaac complied, moving from place to place digging new wells when his enemies quarreled with him over the water. The Philistine king soon recognized that Isaac had been blessed by God and made a treaty of peace between them .

Isaac died at the age of 180 and was buried by both his sons. God affirmed His covenant with Isaac’s son, Jacob, whom He renamed Israel.

Though much of Isaac’s story is narrative without many readily applicable lessons to our lives, we do see in Isaac a heart surrendered to God’s will. For example, he was obedient to Abraham and Sarah and apparently trusting of their guidance. He obeyed when God told him to remain in the land despite the famine and the attacks of his enemies. When Isaac discovered that he had been deceived by his son Jacob, he accepted and submitted to what he recognized as God’s will, in spite of it being completely against the accepted tradition at the time. Just as Isaac discovered, we, too, must remember that God’s ways are not our ways or His thoughts the same as ours .Isaac’s story also demonstrates God’s faithfulness to His promises—He had made a covenant with Abraham and would continue to uphold it with Isaac and with Isaac’s son Jacob.

Though there are no great achievements to speak of concerning Isaac’s life, it was Isaac whom God chose to continue the covenant line, the same line that would produce the Messiah, Jesus. And for many generations the Jewish nation described their God as the God of Abraham, Isaac, and Jacob. Indeed, there are several passages of Scripture where God describes Himself in the same manner .Isaac is listed with the other patriarchs and has a place in God’s kingdom . And there is no greater honor we can hope to achieve.