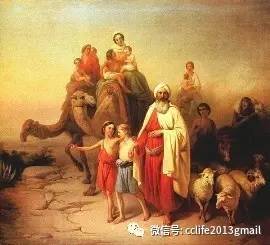 Jacob’s life began with a struggle. As a twin in the womb with Esau, he jostled for position and was born grasping his brother’s heel. Jacob’s name is translated as “he deceives” (Genesis 25:26).When his mother, Rebekah, asked God during her pregnancy what was happening to her, God told her that there were two nations within her womb who would become divided. One would be stronger than the other, and the older would serve the younger .

Jacob and Esau grew up together living a nomadic life. Esau became a fine hunter and loved to be out in the countryside while Jacob “was content to stay at home among the tents” .Esau, being a hunter, was his father’s favorite as Isaac loved the wild game Esau brought home, while Jacob was favored by his mother .This destructive favoritism would follow the family into the next generation, most notably with Jacob’s son Joseph. Such was Jacob’s favoritism for Joseph that it caused great resentment among his brothers and nearly cost Joseph his life.

When Isaac was old and his eyesight faded, he thought he was near to his death and made arrangements with Esau to pass on to him the blessings due to the firstborn son.On hearing this, Rebekah devised a plan to deceive Isaac into blessing Jacob instead. Thus, Jacob received his father’s blessing in Esau’s place. Esau vowed he would kill Jacob for this as soon as the period of mourning for his father’s death ended .As it turned out, his father did not die for about another twenty years .

However, Rebekah became aware of Esau’s plan and warned Jacob. Rebekah also told Isaac that Jacob should find himself a wife from among his own people, so Isaac sent Jacob to his uncle Laban who lived in their ancestral home of Haran . During Jacob’s journey, he had a dream of a ladder to heaven with God at the top and angels ascending and descending. This imagery is mirrored in Jesus’ words to His disciple Nathanael .God gave Jacob the assurance of His presence and reiterated His promise to Abraham .As a result of this experience, Jacob renamed the place “Bethel,” meaning “house of God,” and he vowed to serve God.

After Jacob settled in Haran, Laban offered him payment for the work he had been doing as a shepherd looking after his flocks. Jacob offered to work for Laban for seven years in return for Laban’s daughter Rachel, whom he loved deeply. However, Jacob was to discover that his uncle Laban could be just as much a deceiver as he had been. On Jacob’s wedding night, Laban substituted his older daughter, Leah, for Rachel . However, Laban agreed to give Jacob Rachel as well, provided Jacob finish the wedding week with Leah before taking Rachel as a wife, and then work another seven years for him. Jacob agreed to this plan. While both women remained Jacob’s wives, Jacob loved Rachel more than Leah , a source of continued family strife.

While Rachel remained barren, Leah gave birth to Jacob’s firstborn son, Reuben. Then followed the birth of eleven more sons from Leah, Rachel, and their two handmaidens. These sons would be the progenitors of the twelve tribes of Israel. After the birth of Joseph, Rachel’s first child and Jacob’s eleventh, Jacob asked Laban to send him back to his homeland. Laban asked Jacob to remain, telling him to name his wages. Jacob requested only the specked and spotted sheep and goats from all Laban’s flocks that he tended, to make flocks of his own. It is unclear how or why it worked, but Jacob put striped branches in front of the flocks when they mated, and it resulted in specked and spotted offspring that he could claim for himself. Jacob did this only with the strong animals so that his flocks grew strong while Laban had weak flocks . Jacob recognized that Laban and Laban’s sons’ attitude toward him had changed. It was then that God commanded Jacob to return to the land of his fathers accompanied by His promise, “And I will be with you”. Jacob left Haran, taking with him his wives and children and all the vast flocks he had accumulated. When Laban learned that Jacob left, he pursued him. But God told Laban in a dream to “be careful not to say anything to Jacob, either good or bad” (Genesis 31:24). Laban did ask Jacob why he’d left secretly and spoke of his power to harm Jacob were it not for God’s warning. He also accused Jacob of stealing his household idols. Continuing the legacy of deception, Rachel who had taken the idols unbeknownst to Jacob, concealed them from her father during his search. Laban and Jacob eventually parted company after swearing an oath not to invade one another’s lands.

Next Jacob had to face his brother, Esau. Though twenty years had passed since they had last seen each other, the memory of Esau’s threat to kill Jacob had never left him . Jacob sent messengers ahead of him with gifts, instructing them to tell Esau that he was following after. The messengers returned to Jacob, telling him that Esau was coming to meet him along with four hundred men. Afraid that Esau was coming to destroy him, Jacob divided his family into two groups, hoping at least one group could escape attack. Jacob prayed for God to save him, reminding God that He had sent Jacob back to the land of Abraham and had promised to make him prosper and his descendants numerous .Jacob selected more gifts for Esau, which he sent ahead with servants in waves, hoping to pacify Esau. That night he sent his wives and sons away from him as well. While alone, in the middle of the night and afraid for his life, Jacob wrestled with a man who he later learned was God .The man touched Jacob’s hip, putting it out of socket, but at daybreak Jacob still refused to let the man go. He asked for a blessing and was told, “Your name will no longer be Jacob, but Israel, because you have struggled with God and with humans and have overcome” . Jacob asked the man his name and then understood that He was God. Jacob named the place Peniel, recognizing that He had seen God and yet God had spared his life. This wrestling match and name change marked a new beginning for Jacob.

The reunion with Esau was not the attack he had feared: “Esau ran to meet Jacob and embraced him; he threw his arms around his neck and kissed him. And they wept” . Esau offered to accompany Jacob the rest of the way. Jacob refused, citing the size of his family. Jacob also refused Esau’s offer to leave some of his men with the group. It seems that Jacob did not fully trust his brother Esau, and so, instead of meeting Esau in Seir, Jacob took his family another route where they finally purchased a plot of land and settled in El Elohe Israel or “Mighty is the God of Israel.” Though he had been given a new name, Jacob the deceiver was still wary of others who might be trying to deceive him. Here we see that the mind of those who plot to deceive is always suspicious of the motives of others and can never fully be at rest.

Genesis 34 records the rape of Jacob’s only daughter, Dinah, and the revenge her brothers Simeon and Levi carried out on the rapist’s entire community. Once again, we see how the deviousness of the parents is passed on to the children in the deceitful way they overcame their enemy. Jacob was angry with his sons and, in obedience to God’s guidance, moved his family back to Bethel . where God reappeared to Jacob and confirmed His blessing . In Jacob’s meeting with God, he received the promise that kings and many nations would come from him and that the land God had promised his forefathers would be his inheritance .

Jacob and his family later moved from Bethel to Eder. On the way, Rachel gave birth to her second son, Jacob’s twelfth—Benjamin. Rachel died in childbirth. Jacob was reunited with his father, Isaac, in Mamre. When his father died, both Jacob and Esau buried him.

Similar to his mother, Jacob also had favorites. Rachel was his favorite wife, and her children—Joseph and Benjamin—were his favorite sons. In fact, Joseph was so favored that his brothers became jealous and sold him into slavery. But God was with Joseph, and he eventually fared well in Egypt and rescued his family, Jacob included, from famine. Jacob died in Egypt and was embalmed at Joseph’s request .Joseph and his brothers took Jacob’s body back to Canaan to be buried alongside Abraham, Sarah, Isaac, Rebekah, and Leah. Prior to his death, Jacob had blessed his twelve sons and requested to be buried in the cave that Abraham had bought for burial. Jacob had also blessed Joseph’s two sons, giving the blessing of the firstborn to the younger son. Unlike his father who had been deceived into giving the blessing of the firstborn to Jacob, Jacob crossed his hands to purposefully give the uncustomary blessing.

The similarities in the lives of Abraham, Isaac, and Jacob are striking. In their stories we see the importance of family and the influence of example. Themes like deceit, favoritism, family strife, unexpected blessing, reconciliation, and faith flow through the narratives. Mostly, we see that God is faithful to His promises. He chooses to accomplish His kingdom purposes through sinful people who are willing to believe Him. He can make those sinful people new—giving Abram the name Abraham, Jacob the name Israel, and making those who believe in Jesus Christ new creations .Though our sinful patterns might still plague us, in Christ we find forgiveness for our sins as well as power to overcome. We are invited to participate in God’s work in the world. We have new names and can trust the promises of the God who proves Himself faithful time and time again.

Jacob’s name, “deceiver,” does seem to characterize much of Jacob’s life. But he was also Israel, one to whom God made promises to which He remained faithful. God appeared to Jacob, and Jacob believed God’s promises. Despite Jacob’s faults, God chose him to be the leader of a great nation that still bears his name today. But for this, it is unlikely that we would know much about Jacob, who appears to be in the middle of events while the key players are those around him. There is no great wisdom or bravery in Jacob to speak of, and we are tempted to see him as little more than God’s passive instrument. If we are tempted to think that, because we aren’t in the spotlight performing great acts for God, we are unimportant to Him, then we should consider the life of Jacob and know that, in spite of our failings, God can and will still use us in His plan.