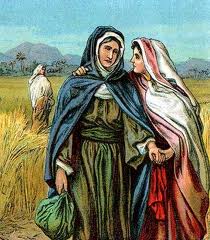 Ruth was “of the women of Moab” but was genetically linked to Israel through Lot, the nephew of Abraham (Ruth 1:4)Ruth lived in the time of the judges. She had married the son of an Israelite family while they were living in Moab, but at some point her father-in-law, her husband, and her husband’s only brother died. So Ruth had to make a decision whether to stay in Moab, her home, or to go with her mother-in-law, Naomi, to a land she had never known—Judah.

Ruth loved her mother-in-law and had great compassion for her, seeing that she had lost not only her husband but both of her sons. Ruth’s sister-in-law, Orpah, made the choice to stay with her people in Moab, but Ruth could not bear to part from Naomi or from the God of Israel that she had come to know. Together, Ruth and Naomi made the journey back to Judah to the city of Bethlehem, where they decided to settle. Ruth’s testimony spread, and Boaz, the owner of a nearby field, heard of her faithfulness, as recorded in Ruth 2:11–12: “Boaz replied, ‘I’ve been told all about what you have done for your mother-in-law since the death of your husband—how you left your father and mother and your homeland and came to live with a people you did not know before. May the LORD repay you for what you have done. May you be richly rewarded by the LORD, the God of Israel, under whose wings you have come to take refuge.’”

The custom of Israel was that a man was to take his deceased brother’s wife in order to continue the family line. Since Ruth’s husband’s only brother had also died, she and Naomi would have to take care of themselves. Ruth went out every day to glean fields to provide food for herself and Naomi. She found work in Boaz’s field, not knowing that he was a relative of Naomi’s. When Boaz returned home, he noticed Ruth and asked the man in charge of the reapers about her. The servant told Boaz about Ruth’s faithfulness to Naomi and her hard work in the fields. Boaz personally told Ruth to remain in his fields and stay close to the other women, also telling her that he’d warned the young men not to touch her and inviting her to drink freely of the water the men had drawn anytime she was thirsty . Ruth responded in humility and appreciation, asking why he would show such favor to her, a foreigner, at which point Boaz told her he’d heard of her sacrifice for her mother-in-law . Boaz continued to show her every courtesy, providing a meal to her and instructing his reapers to purposefully leave some grain behind for her to glean .

When Ruth told Naomi where she had gleaned, Naomi was happy and told Ruth that Boaz was a close relative, a kinsman of Elimelech, Naomi’s husband; therefore, Boaz was qualified to become Ruth’s kinsman-redeemer. It was of the utmost importance in Israel to perpetuate the name of every family of Israel, so this gave Ruth the right to appeal to Boaz to fill that role. Naomi encouraged Ruth to continue gleaning in Boaz’s fields, which she did through the barley and wheat harvests .

At the barley harvest, Naomi suggested that Ruth go to Boaz while he winnowed barley and essentially ask him to be her kinsman-redeemer. Ruth had an open mind and a teachable spirit, so she listened to her mother-in-law and did as she had requested . Ruth followed Naomi’s instructions to the letter. Boaz responded favorably, but he knew of an even closer male relative who would be first in line to redeem Ruth and her family’s property. That man had to be consulted before Boaz could take Ruth as a wife. The very next day, Boaz met with the other relative, who legally relinquished all his rights to Ruth and Naomi’s property.

Ruth and Boaz soon married and had a son named Obed. The women of the land rejoiced, seeing the faithfulness of God and saying to Naomi, “Praise be to the Lord, who this day has not left you without a guardian-redeemer. May he become famous throughout Israel! He will renew your life and sustain you in your old age. For your daughter-in-law, who loves you and who is better to you than seven sons, has given him birth” .

Ruth trusted the Lord, and He rewarded her faithfulness by giving her not only a husband but a son (Obed), a grandson (Jesse), and a great-grandson named David, the king of Israel . Besides these gifts .God gave Ruth the blessing of being listed in the lineage of Jesus .

Ruth is an example of how God can change a life and take it in a direction He has foreordained. We see Him working out His perfect plan in Ruth’s life, just as He does with all His children . Although Ruth came from a pagan background in Moab, once she met the God of Israel, she became a living testimonial to Him by faith. Even though she lived in humble circumstances before marrying Boaz, she believed that God was faithful to care for His people. Also, Ruth is an example to us of hard work and faithfulness. We know that God rewards faithfulness: “And without faith it is impossible to please God, because anyone who comes to him must believe that he exists and that he rewards those who earnestly seek him” .