Many people are looking for “steps to salvation.” People like the idea of an instruction manual with five steps that, if followed, will result in salvation. An example of this is Islam with its Five Pillars. According to Islam, if the Five Pillars are obeyed, salvation will be granted. Because the idea of a step-by-step process to salvation is appealing, many in the Christian community make the mistake of presenting salvation as a result of a step-by-step process. Roman Catholicism has seven sacraments. Various Christian denominations add baptism, public confession, turning from sin, speaking in tongues, etc., as steps to salvation. But the Bible only presents one step to salvation. When the Philippian jailer asked Paul, “What must I do to be saved?” Paul responded, “Believe in the Lord Jesus Christ and you will be saved” (Acts 16:30-31)

Faith in Jesus Christ as the Savior is the only “step” to salvation. The message of the Bible is abundantly clear. We have all sinned against God (Romans 3:23) Because of our sin, we deserve to be eternally separated from God (Romans 6:23) Because of His love for us (John 3:16)God took on human form and died in our place, taking the punishment that we deserve (Romans 5:8) God promises forgiveness of sins and eternal life in heaven to all who receive, by grace through faith, Jesus Christ as Savior (John 1:12)

Salvation and forgiveness of sins is not about following steps. It is about receiving Christ as Savior and recognizing that He has done all of the work for us. God requires one step of us—receiving Jesus Christ as our Savior from sin and fully trusting in Him alone as the way of salvation. That is what distinguishes the Christian faith from all other world religions, each of which has a list of steps that must be followed in order for salvation to be received. The Christian faith recognizes that God has already completed the steps and simply calls on the repentant to receive Him in faith. 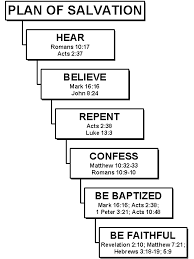